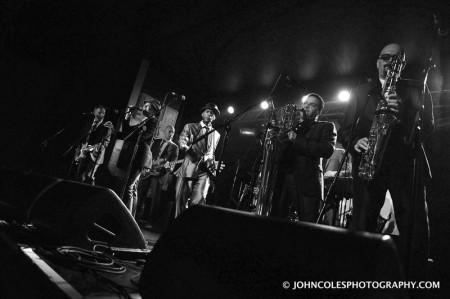 This is 1979" proclaimed The Selecter's Arthur "Gaps" Hendrickson as the 2 Tone veterans took to the stage in London to celebrate their debut album's 35th birthday. "This is England" may have been a more relevant opening gambit given the surfeit of Fred Perrys and Harringtons hugging the frames of the sold-out crowd, many blanking their extra girth and no-clippers-now-required crops in nostalgic reverie.

The band's ageless star, Pauline Black, a lithe and supercharged 60-year-old clad in suit and trilby and conveying more energy than Russia's gas reserves, made the occasional parallel with the Seventies/Eighties cusp of Too Much Pressure's gestation - the political landscape, for example, when introducing "Everyday (Things are Getting Worse)" - but tonight was no mere heritage rewind, more a joyous rude-boy revue from an act as slick and brash as their shiny silver suits.

Of the four tremendous pop groups spawned by the British ska revival (alongside The Specials, Madness and The Beat), The Selecter came closest to marrying the stripped-down ethos of both reggae and punk. Their rootsy basscentric riddims underpinned uptempo vignettes of sprightly brevity, spiked by the melodic twang of Noel Davies' guitar; his replacement tonight, Anthony Harty, replicated Davies' solos note-for-note. He and bassist John Thompson laid down the rock strokes stage-right, while the animated organist and swaying horn section lit up the left; Black and Gaps dominating centre-stage afore drummer Winston Marche. As soon as the offbeat chops of "Three Minute Hero" kicked in, it was clear that the current line-up is a precious one.

Enhanced by the extra oomph of the horn pairing, The Selecter proved an irresistible showband, their vibe strictly good-time, with no incongruous far-right element staining proceedings on the dance floor, as was too often the case back in the day. As well as the hits, notably the bitter-edged "Missing Words", "Black and Blue" was a surprise highlight, Black's angry lyrics delivered with the glee of a woman who's long exorcised her demons. And the escape-fantasy fiesta-lilt of "Back on the Streets"was always going to tick the boxes.

One album won't sustain a whole live set, but when The Selecter went off plan it was no anticlimax, the octet reworking infallible crowd pleasers such as the ska'd-up TV theme to The Avengers while keeping breakthrough stomper "On My Radio" up their made-to-measure sleeves. "Too Much Pressure" itself arrived as an incendiary encore, encouraging the crowd, now in full terrace singalong mode, to bellow out the hook, before a pulsing soca finale kept the floor shaking till the last.

One clear break from 2014 was the lack of smart phones trained on the band - the hands-dirty craftsmanship of the players and the raucous collectivity of the crowd was strictly analogue. But 1979? Well, that was before The Selecter and the rest of their label had to confront fierce internal divisions, breakups, breakdowns and tour-bus turmoil; the 2 Tone story was never black and white, after all. Thirty-five years after the event, the pressure is off. Pauline Black's Dance Crazy ensemble have never sounded more full of themselves.

The Too Much Pressure tour continues nationwide until 13 April. 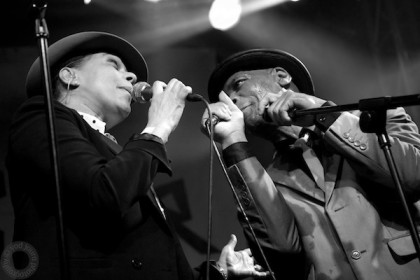 It doesn't seem five minutes since The Selecter became a household name on the 2 Tone Ska scene. But here we are, some thirty five years later they are in Nottingham to celebrate the anniversary of their debut album, Too Much Pressure.

Fronted by Pauline Black, her performance was something that not many people pushing 60 could easily pull off, but the lively performance Rock City witnessed suggested that there's still plenty of juice left in the tank yet!

With tracks such as Three Minute Hero, They Make Me Mad, the brilliant Missing Words, Murder and the outstanding James Bond theme, there was nobody leaving the venue into the rainy cold night that wasn't enthused by tonight's proceedings. The nearly capacity Rock City crowd acting as backing singers may not have been able to hold a tune, but blimey, they all knew the words.

The Selecter is one of those bands that have somehow managed to recapture the youthful exuberance that made their early years at the forefront of the Ska revival scene so exciting. Treating us to that debut album almost in its entirety, they delivered with great gusto and with the abandonment that you would expect as arguably the greatest Ska band rolled back the years and showed that class is always permanent.