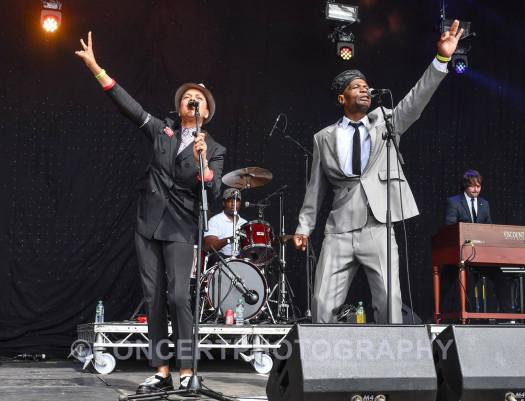 It’s virtually unheard of. Whenever successful bands from the past reform they invariably start trading in nostalgia and become “heritage” acts. No one expects them to grow artistically or continue to excel at the same things that brought them popularity in the first place, but that’s what The Selecter have done ever since the original front pair of Pauline Black and Gaps Hendrickson re-launched The Selecter back in 2011.
In the past few years they’ve played at major festivals like Coachella, the Isle of Wight and Glastonbury, headlined two UK tours and recorded three studio albums, the latest of which, Subculture, is mixed by UK dub-master Prince Fatty. In October, Pauline and Gaps will play fifteen dates with Jools Holland, which include a gala performance at London’s Royal Albert Hall.

“We’ve been going from strength to strength because the reaction to us as a live band has been absolutely brilliant everywhere we go,” says Pauline, who’s also hosted shows on Radio 6 Music and written a critically acclaimed autobiography since reforming The Selecter.

You can’t take your eyes off them when they’re on stage. The anarchic passion that fuelled Selecter gigs during the 2 Tone era, when they toured with the Specials and Madness at the peak of their early fame is still there, except the pair seem more driven than ever. Their confidence is sky-high and they’re also writing the best songs of their career, which is saying something given the enduring popularity of hits like Three Minute Hero, Missing Words and On My Radio.

Box Fresh, taken from the new album, is a case in point. Pauline says that it’s a love song to Gaps – not in the romantic sense, but as a token of her appreciation. “We’ve been making music together for thirty-six years and it’s turned out like this – box fresh!” she exclaims. “I really like that and so that’s why I’m telling him, ’you’re always going to wear the crown, and I promise I won’t let you down,’ because we’ve never had cross words in all that time. We appreciate each other’s talents and what we bring to the band. We’re like the Fred Astaire and Ginger Rogers of ska!”

We have David Cameron to thank for them rediscovering their raison d’être. The day he declared that multiculturalism in Britain had failed, Pauline took part in the Reggae Britannia show at London’s Barbican Centre. “Multiculturalism rules!” she shouted defiantly, to cheers from the multi-ethnic crowd. She met producer Neil Pyzer at that concert and reformed The Selecter with him and Gaps soon afterwards.

In true 2 Tone tradition, the present line-up is emblematic of multiculturalism; there are four black and four white members, with other ethnicities bubbling under the surface. The music they make is still rooted in ska, punk and reggae except they now have a horn section and this fills out their sound magnificently. The quirky melodies and social commentaries remain, yet this is a band that’s more concerned with staying relevant than looking backwards. Their audiences are getting younger and they’ve succeeded in bringing many of their long-time fans along for the ride as well.This was demonstrated by the enthusiastic response given to newer songs on their 35th Anniversary tour last year, which also featured tracks from their debut album Too Much Pressure.

The title of their latest album, Subculture, refers to the 2 Tone movement’s enduring ability to unite disparate tribes into a loosely knit collective – one that shares similar ideals and experiences. This is why The Selecter can play punk festivals like Rebellion and still get a great welcome.
“It’s a way of being; a way of life and a way of identifying yourself,” says Pauline. “2 Tone unified all those different groups and we can still do that. We can go anywhere and that’s the beauty of 2 Tone. It’s the hybrid nature of it that makes everything possible.”

These days it’s not just Punks, Rude Boys or Mods who rally to their cause, but a global demographic that’s eager to hear music which stands for something, and has a message.

Babble On was inspired by events in Gaza, and courted controversy with the lines, “I don’t care who you pray to, you’re killing innocents.” The livewire rhythm takes no prisoners, just like the lyrics, but then speaking out against injustice has always been a 2 Tone hallmark.

Breakdown warns of what can happen when people are pushed too far. It was written in response to the growing number of black males killed by police, and the lack of accountability for their deaths. It’s this kind of uncompromising attitude that gave early songs like Celebrate The Bullet or Bristol And Miami such resonance, and The Selecter aren’t in danger of letting up anytime soon. It was identification with a disenfranchised working-class that underpinned the band’s popularity more than thirty years ago, and their social conscience burns ever more fiercely in this age of austerity.
Karma is about inequality and a society that forces people to “scramble for crumbs that the rich throw away,” whilst zero hours contracts and the bedroom tax come under fire on Hit The Ground Running.

Songs like these continue a narrative found on two other studio albums recorded since their comeback. My England, from Made In Britain and London’s Burning from String Theory were both powerful missives from Britain’s inner cities, alerting us to the anger and frustration lying just beneath the surface. “Light the blue touch paper
and retire” indeed.

The Selecter originally formed in Coventry during the summer of 1979, just as Thatcherism was about to dispense the last rites to Britain’s industrial heartlands. That’s when Pauline first met Gaps, who’d migrated to England from St. Kitts. His Caribbean upbringing has long infused their music with joy – witness those irresistible versions of Jamaican standards like See Them A Come and Carry Go Bring Come, or self-penned numbers written in an early ska or reggae style like Stone Cold Sober and It Never Worked Out, which feature Gaps on lead vocals.

The Selecter don’t record many covers – only inspired ones. They sang Back To Black as a tribute to Amy Winehouse on Made In Britain, whilst the effusive Secret Love, taken from String Theory, was the track that so captivated Jools Holland. Their latest cover – and guaranteed crowd pleaser – is Because The Night; a song written by Bruce Springsteen that became Patti Smith’s biggest hit. It wasn’t Pauline’s idea to do it but you’d never guess by the way she lays claim to it on stage, and brings it back to life on Subculture.

Still I Rise was triggered by the death of Maya Angelou and her famous poem of that name. Pauline met her once whilst auditioning for a play, and was very moved by her passing. “I respected her so much. It’s not easy for women in general but particularly black women if you go against the grain of the whole R & B tradition and things like that. I’ve always gone against the grain of every damn thing there is but nevertheless, still I rise!”

Pauline quit the band to pursue an acting career after their second album Celebrate The Bullet was released in 1982. As a presenter with Channel 4’s Black On Black she met and interviewed many of the leading black figures from that era, including Jesse Jackson, Stokely Carmichael and the widow of Dr. Martin Luther King. She also appeared in television series such as The Bill, Hearts And Minds and The Vice as well as various theatre productions – most notably All Or Nothing At All, which celebrated the life of Billie Holiday. She and Neol Davies attempted to revive The Selecter in 1991 but their partnership lasted barely a year. Pauline continued to front the band in Davies’ absence and put out several albums before joining other ex-punk and 2 Tone personnel in 3 Men & Black, who performed acoustic versions of their old hits.

By the time she and Gaps reformed today’s definitive version of The Selecter, Pauline had undergone some dramatic changes in her personal life. Adopted as a baby and raised in Essex by a white couple before heading for Coventry and a place in music history, she was reunited with her birth mother – now living in Australia – in 1996 and began work on her autobiography Black By Design, which was published in 2013 and is both articulate and thought provoking on many levels. “The main reason I wrote it is because you don’t hear too much about mixed race situations, like when a black person is adopted by white parents,” she says. “A lot of us struggle to find our own identities and that’s what I wanted to get across.”

She’s written another, as yet unpublished book since then called The Last Supper about Boko Haram and the plight of refugees that she jokingly retorts, “may get published in another fifteen years’ time,” although it’s sure to appear long before then. In the meantime The Selecter have another UK tour planned for the end of this year, after she and Gaps’ stint with Jools Holland has finished. The band then head for Australia and America early 2016, before playing further dates in Europe, UK and around the world.

Recommend this page on: